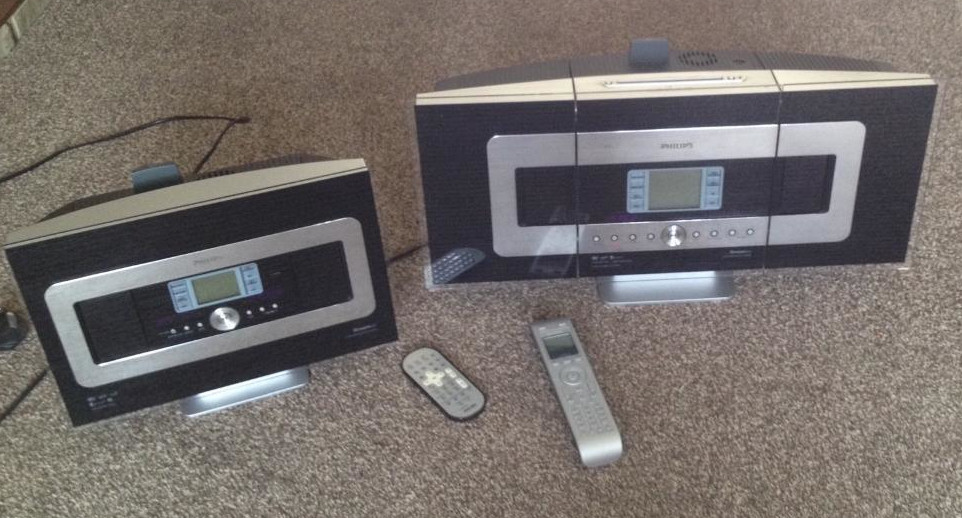 This is the first generation of the Streamium multi-room music system. Introduced in 2005, they were typically sold as shown here: a main unit with a CD drive and 40Gb hard disk, and a smaller station connected by WiFi for listening in another room. This would have cost you the eye-watering sum of 900 Euros, yet these fine-sounding multi-room systems can be picked up for a mere pittance these days, faulty ones being almost worthless [I've never paid more than £30 for a working centre unit]. You could add extra stations up to a total of four. The "mothership" came with a large remote which replicated the display on the machine so you could operate it successfully from some distance away. It also ate batteries at an alarming rate!

In addition to ripping, storing and streaming music from CDs, given an internet connection (either wired or WiFi) these machines were able to receive internet radio stations. Sadly, the server providing this functionality was turned off by Philips some years ago, and the only reason to connect one to the web now is to access the Gracenote database so the machine can correctly tag files when ripping them from a disc. Considering how expensive these systems were, this was a pretty shabby move from Philips.